Accepting injury as part of you…

I’m fine but THIS isn’t! ‘This’ being an injury, a limb or something someone has labelled as being external to their body. But it’s part of you I replied and by rejecting it it’s only going to alienate it from your body more. Wow, they said they’d never thought of it like that and they would work on becoming one with their injury (after a bit of chirping and a few toddler stomps!). By becoming acceptant of it, learning to nourish it and stopping wanting it to go away we can let go of some of that angst. Sometimes going through injury can be a bit like stages of grief and ‘bargaining’ can be a big tool here – if I just do this or don’t do that it’ll be ok. 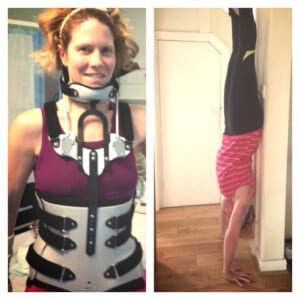 I recounted a story of how a blind friend once said that she gave her white cane a bad name and from that day onwards it became her enemy. Something that was supposed to be aiding and assisting her was now a swear word, a pest to her existence. It was only when I broke my back and was using a back brace to get around she said please don’t give it a bad name, call it a nice name so it can become something that’s helping you. From that day forth Maddie helped me rehabilitate. She was my aid and my companion through recovery. I will never forget wanting to chop my own leg off though from sciatic pain.

Now when I treat people with nerve pain I describe it as emotionally irritating and can see a flicker of recognition. The not knowing where it’s moving around to or what to do for he best is infuriating. What you would do to forget it for one second but I tell people that one day they will even forget what limb it was in. Pain is like an ex partner, you never remember why you left until you go back!